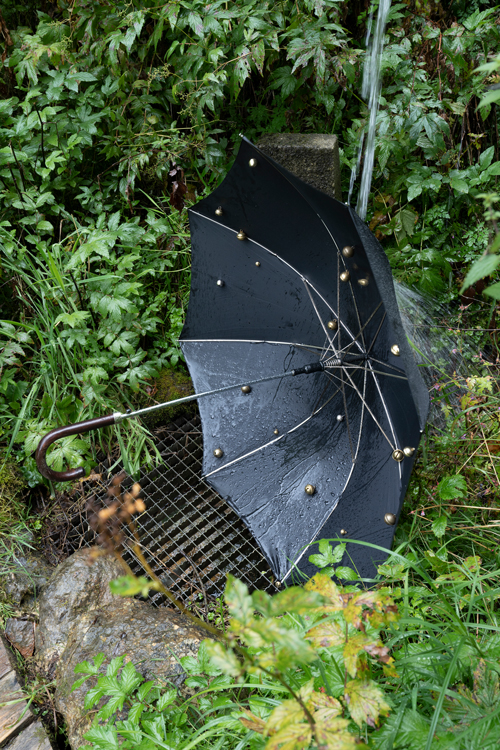 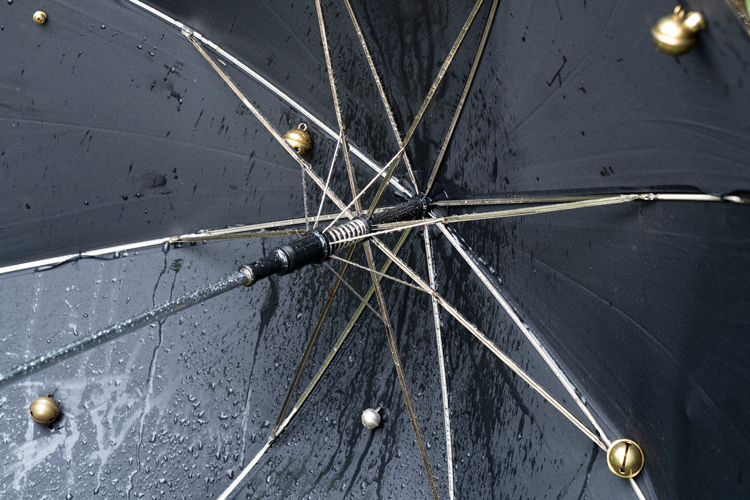 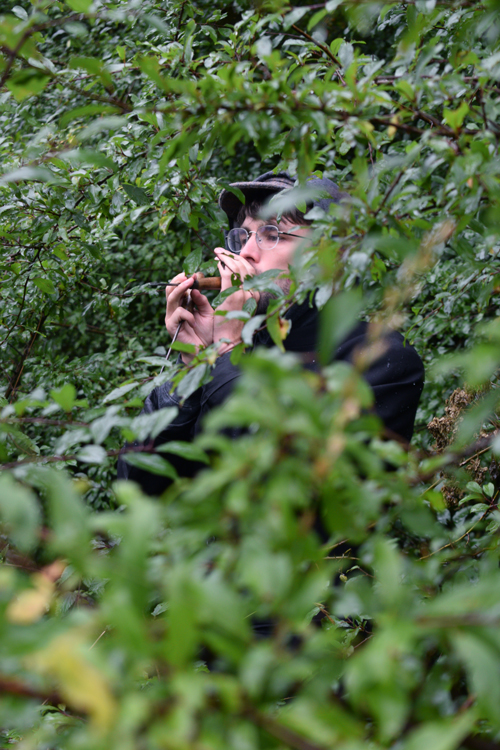 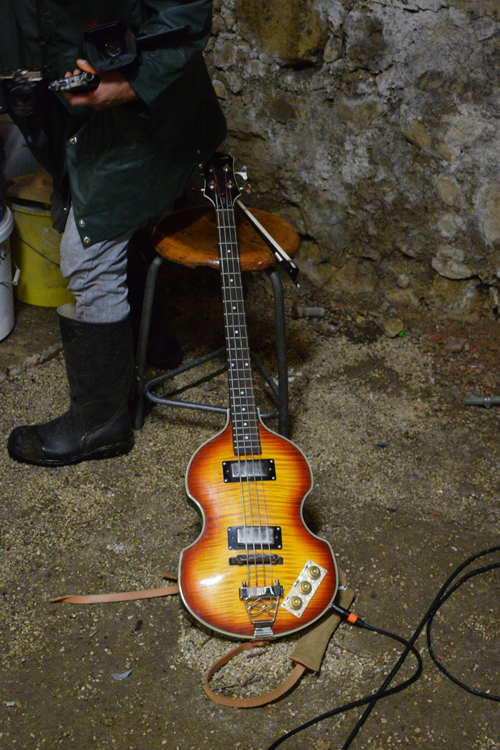 
Fiolle is the name of the small but acoustically very present brook that runs through the grounds of La Dépendance. Inspired by the fresh spring water, which is used as a fridge or shower during the residencies, the Hammer Band developed a site- specific performance. Two umbrellas, fitted with bells on the inside, were placed in the streamlet so that they begin to sound. Accompanied by the continuous sound of water and bells, Raphael Stucky and Res Thierstein improvise on self-made pipes. The call and response piece, which was performed in the stream and in the bushes, mimics a form of an animal communication.

The second part of the performance took place in the musty-smelling cellar without any lights. The audience as well as the performers themselves were surrounded by complete darkness. The sound of the electric bass (played with a bow) was accompanied by a distorted voice and echoed through the void.

The Deep Listening practice developed by composer and musician Pauline Oliveros plays an important role in the creation of the Hammer Band‘s sound performances. The active perception of the surroundings and the attention to oneself and the attention to another are central. In this sense, listening takes on a social dimension that can teach us about empathy and sharing. 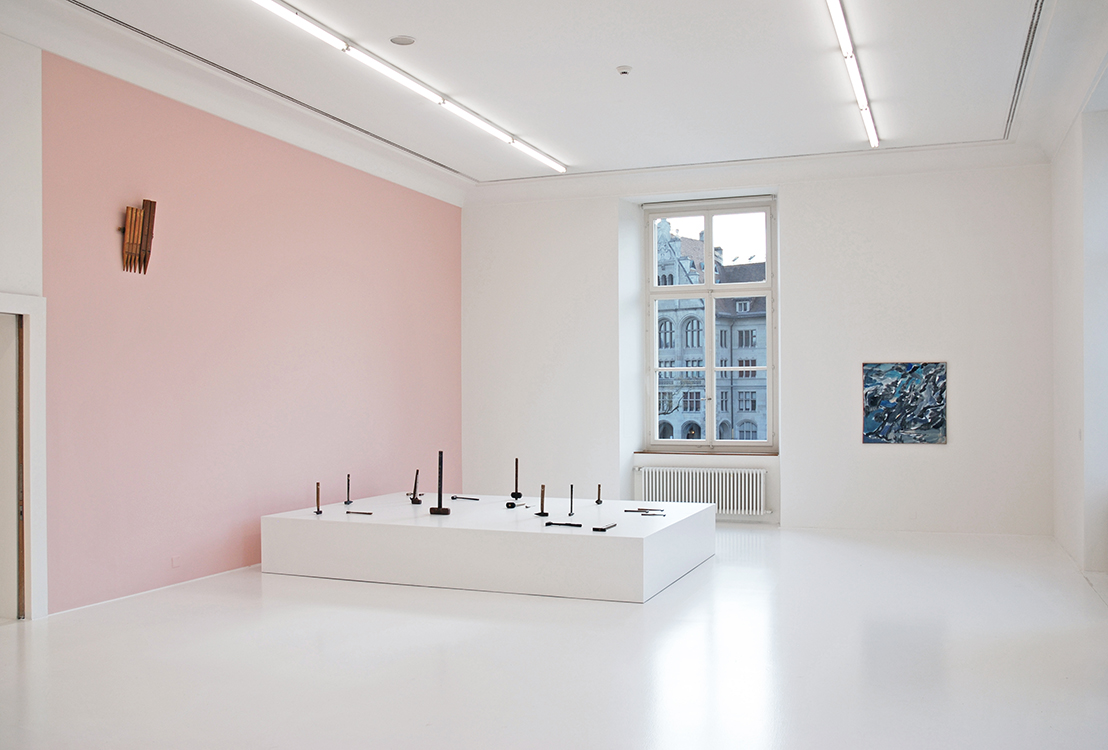 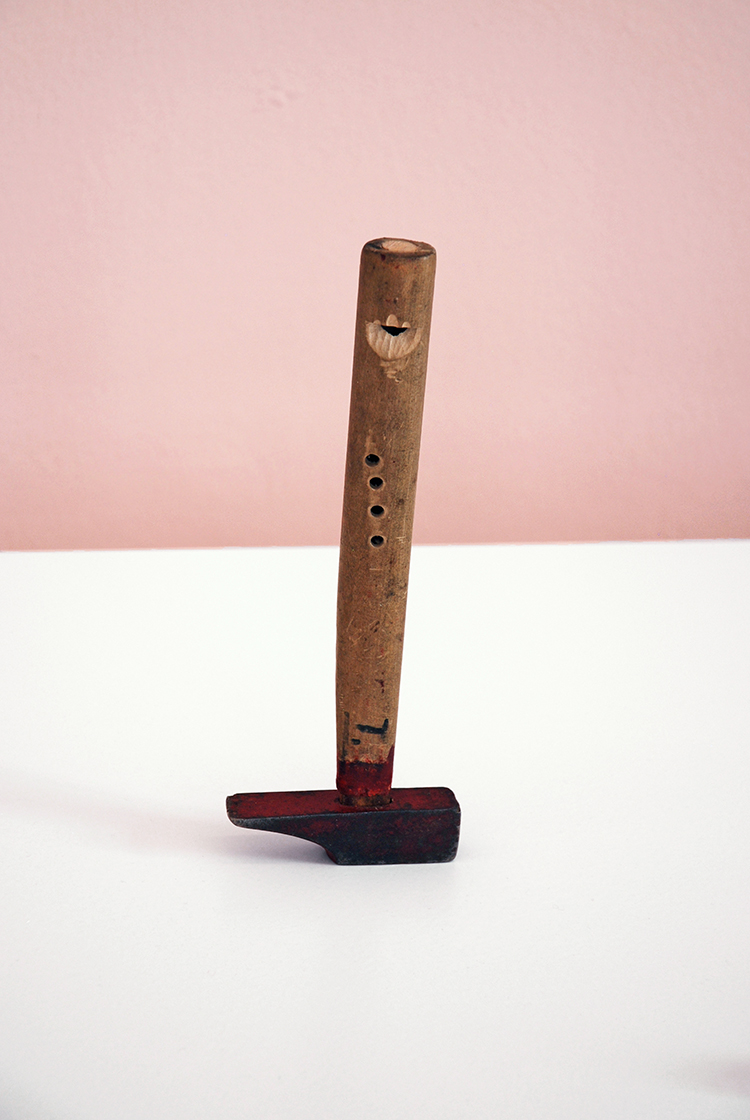 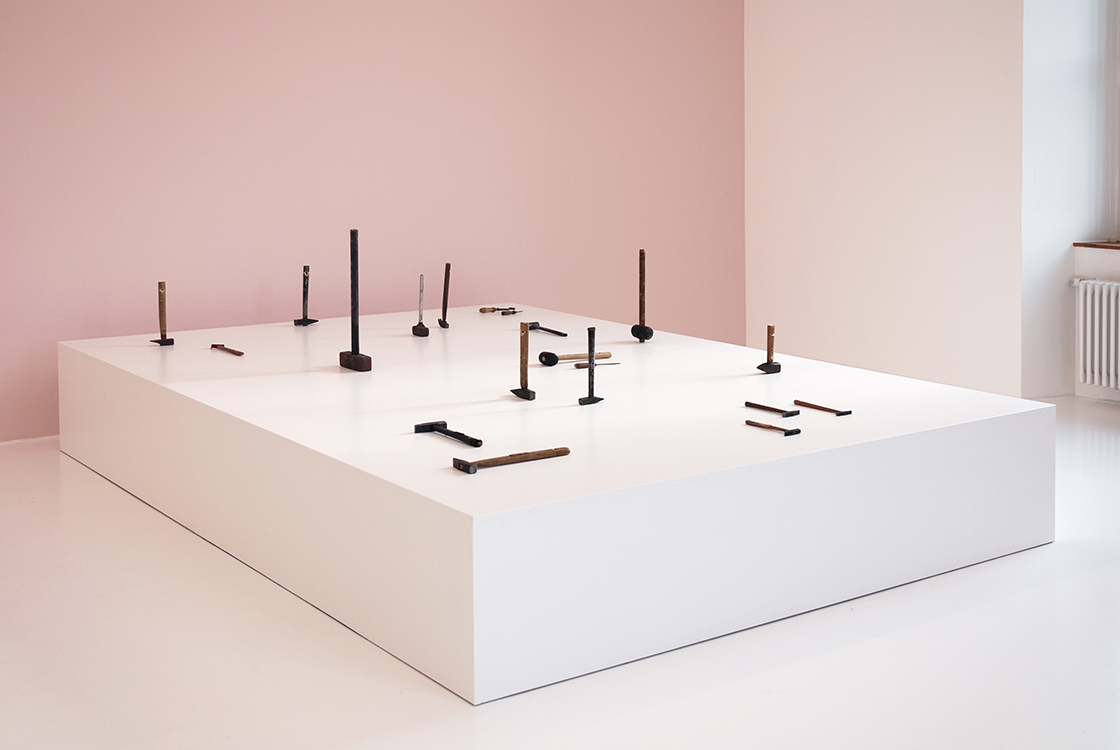 
The artist’s interest in the proximity of labour, rhythm and music becomes visible in Hammerflöten. His idea was to add the characteristic of a musical instrument to a hammer in order to emphasize its already existing sonic expression. These hybrid objects have a sculptural as well as a functional character. Stucky investigates the process of revaluating, recirculating and reanimating an artefact. 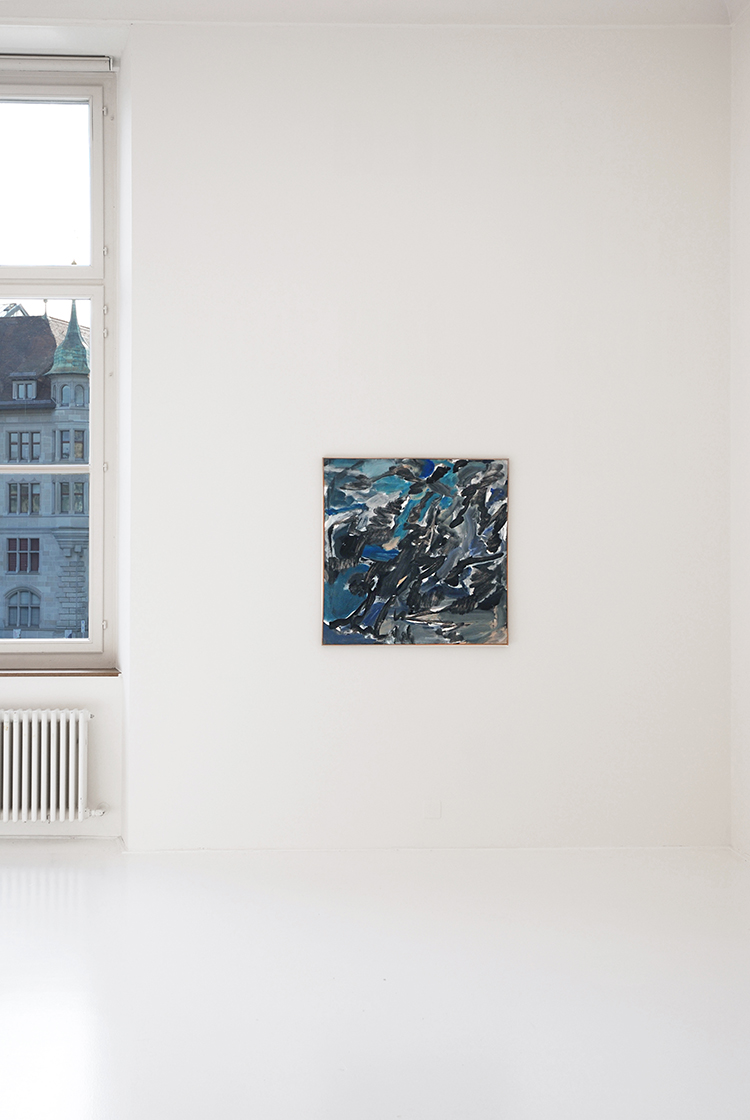 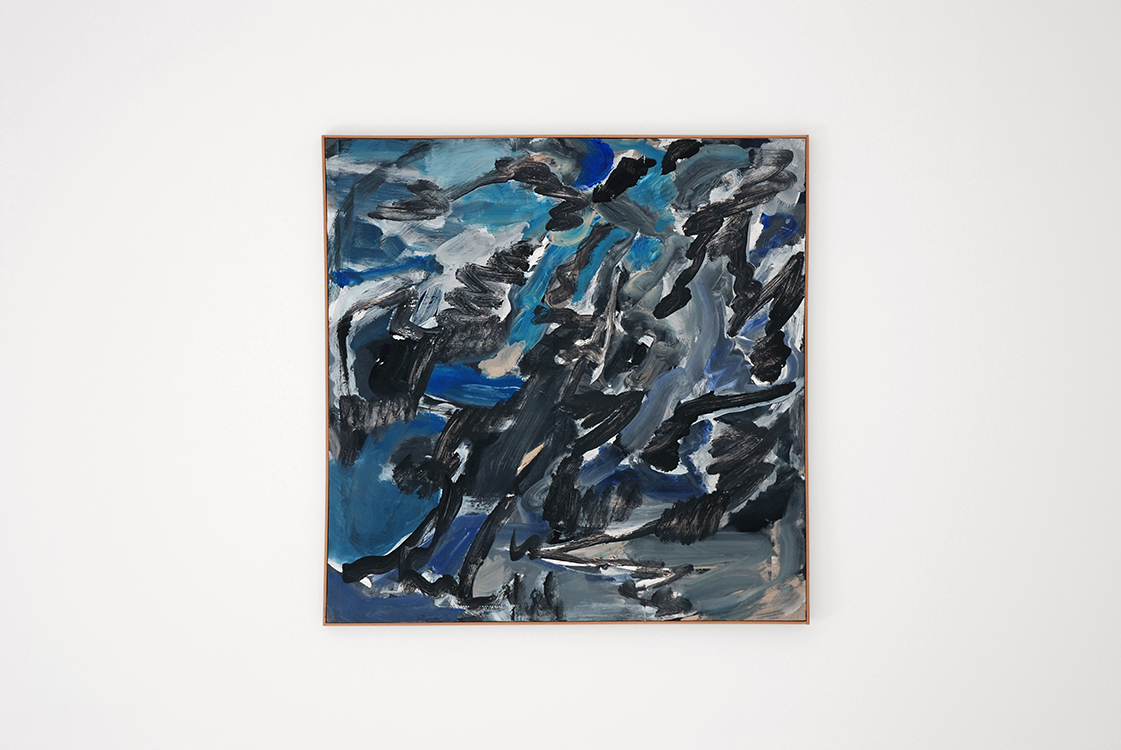 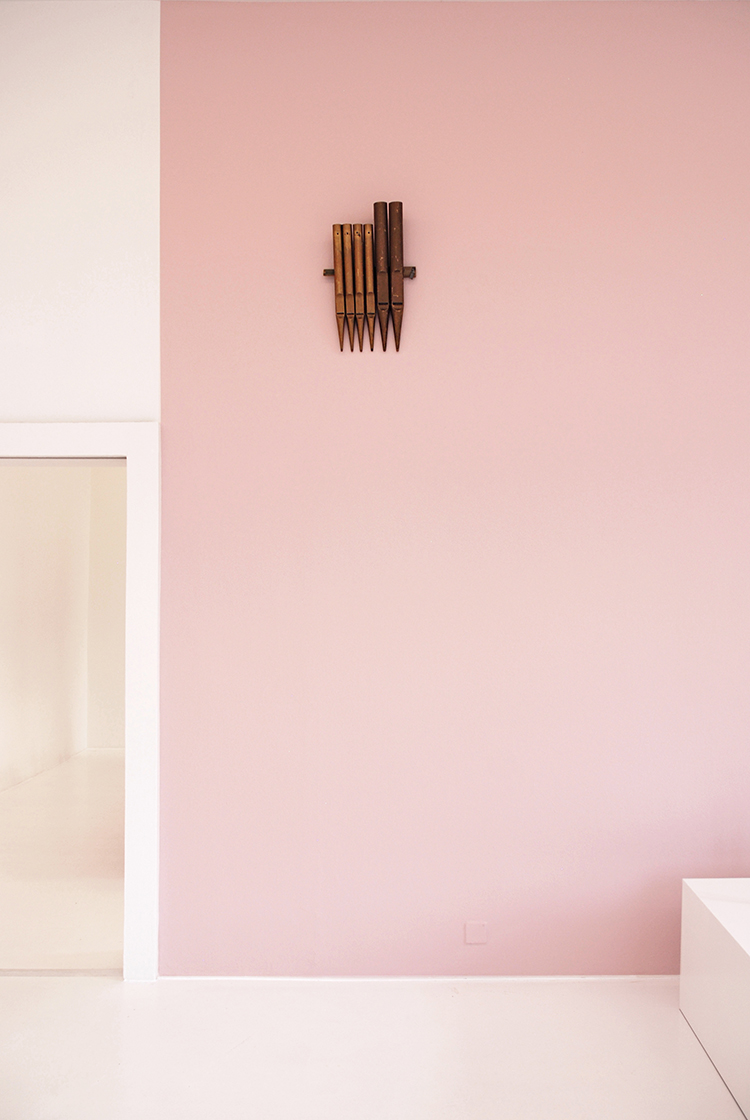 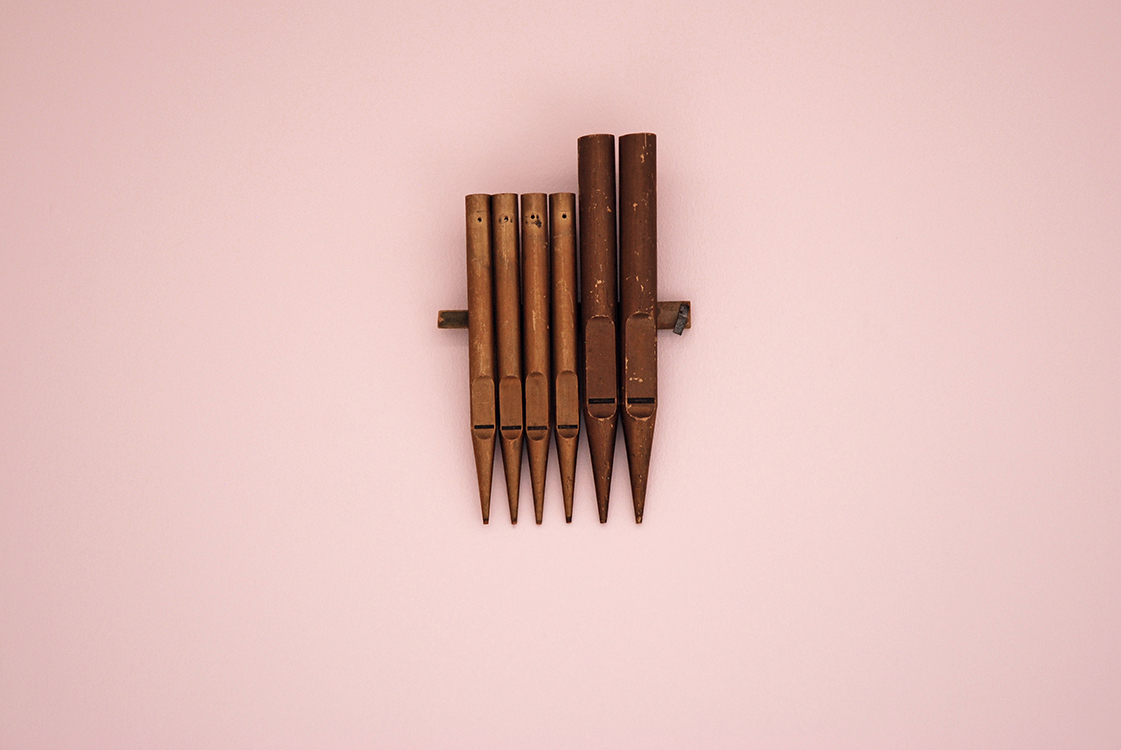 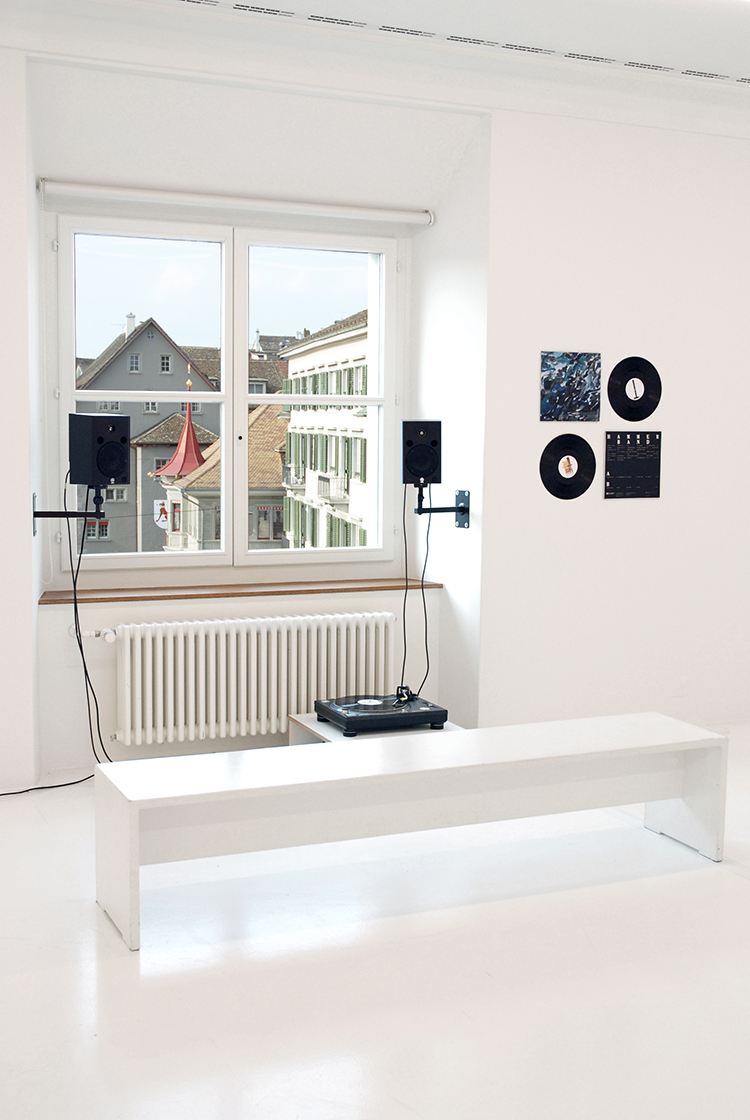 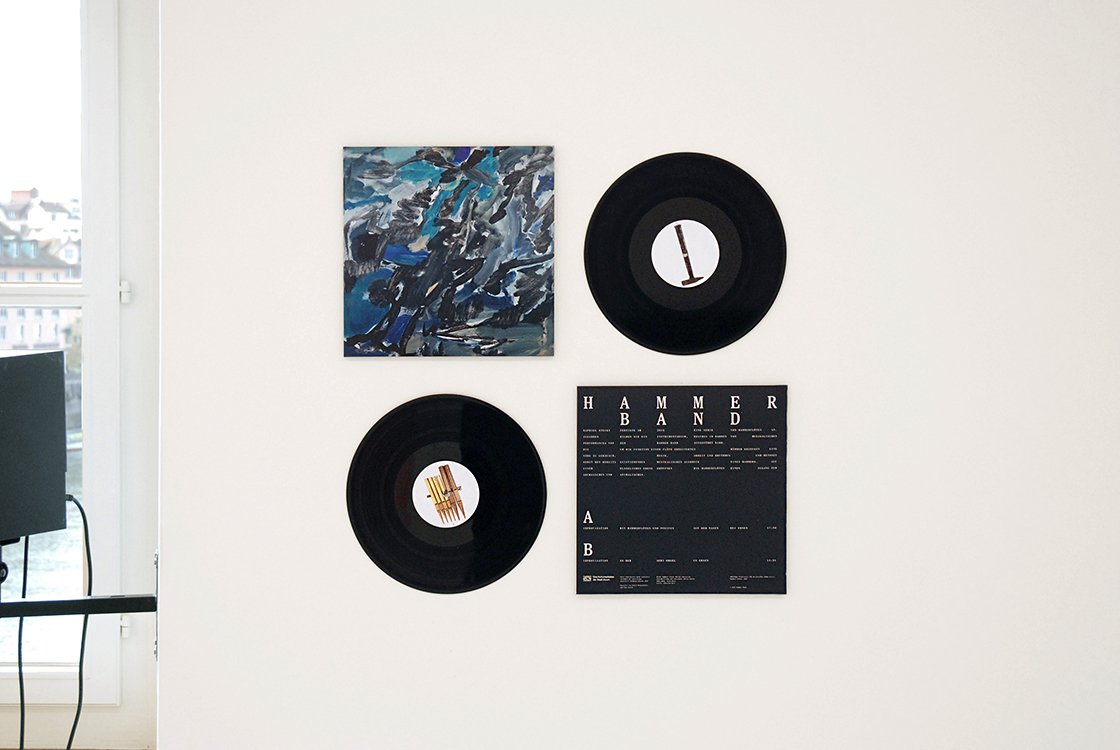 
This vinyl record, produced for the Helmhaus, is an agglomeration of the various works on view in the exhibition. On side A, one discovers the sounds of the Hammerflöten recorded in the wintry forest in the Valais. You can listen to the footsteps in the snow, the flute playing, the little brook and at the end of the track the birds singing. Side B features a four-hand improvisation piece played on the Aebi organ in Ernen. Raphael Stucky‘s father is the organist in the village. 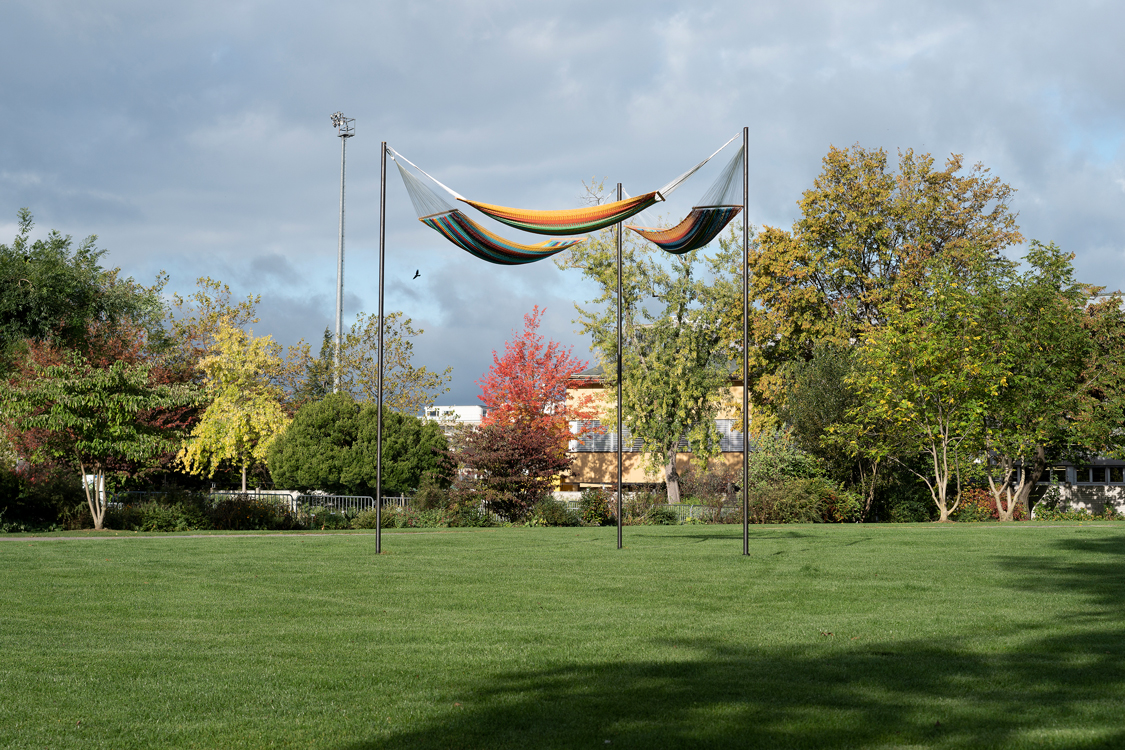 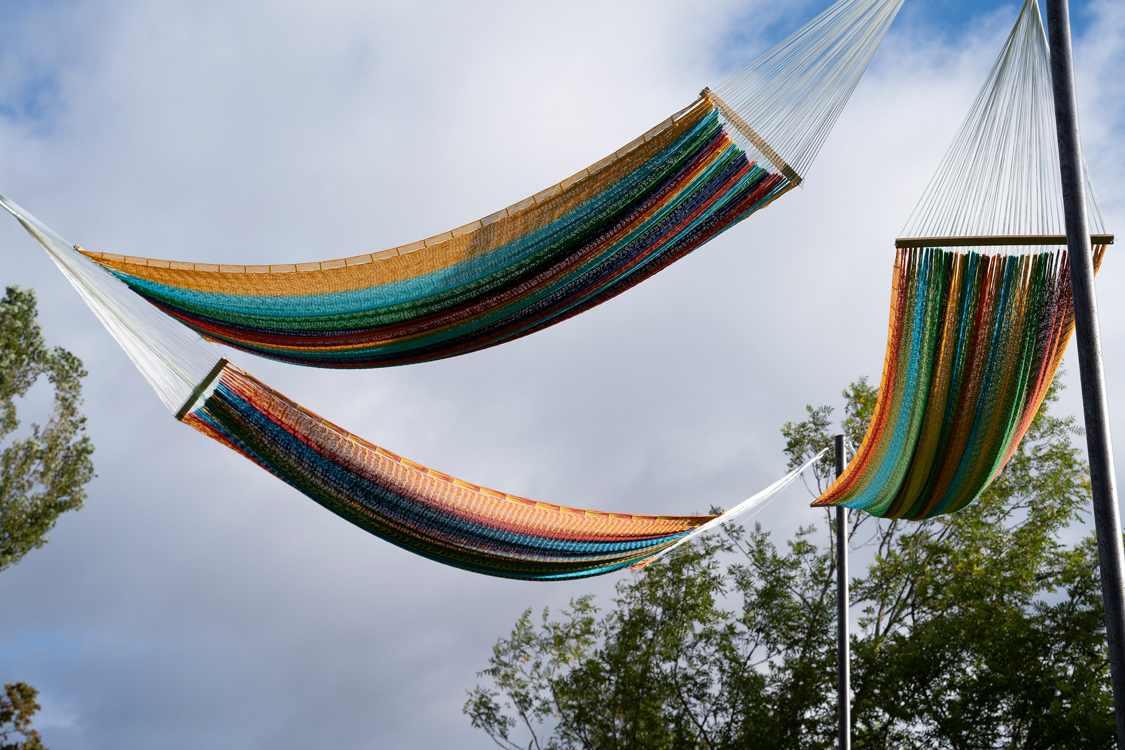 Kurzer Fall is a site-specific installation that provokes ambivalent feelings through a historical reference to the gallows of Zurich. In the same place where nowadays visitors of the open-air swimming pool relax on the lawn, people were once hanged. During the renovation of the pool in 2006, human and animal skeletons and the remains of the gallows were excavated. The artwork adopts the triangular shape of medieval gallows, letting three hammocks dangle between steel tubes. Violence, death and the exercise of power are paired with conformism, relaxation and leisure culture. 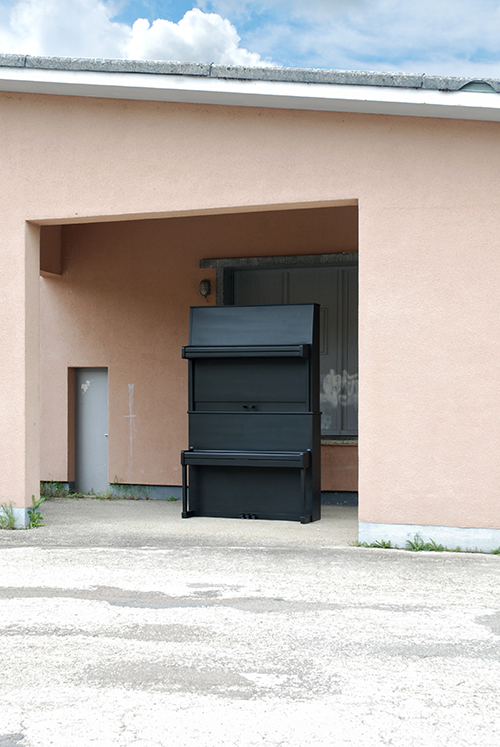 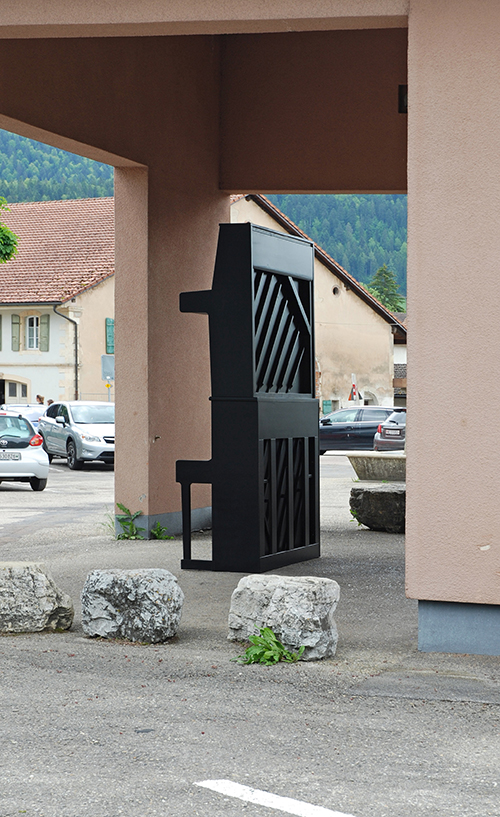 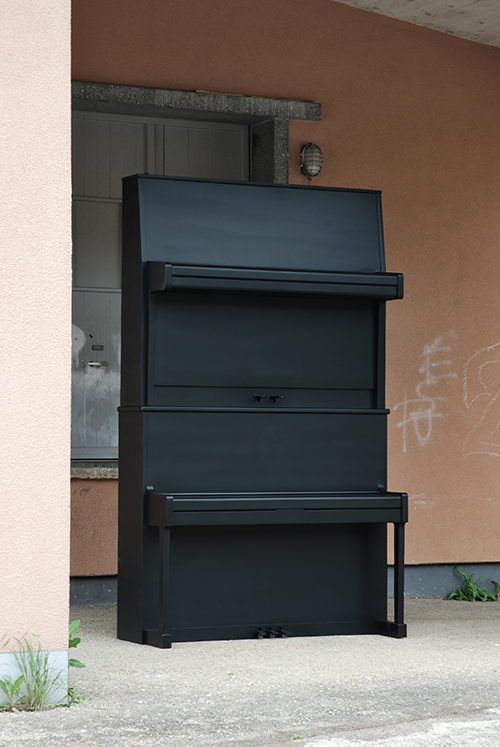 Piano Piano consists of two piano dummies stacked on top of each other. By reducing the pianos to their outer forms, the artwork emphasizes the physical and sculptural presence of a musical instrument. The black painted pianos are installed at the train station in Môtiers and refer to the phenomenon of street pianos in public space. They also recall John Cage‘s compositions for closed pianos (A Flower and The Wonderful Widow of Eighteen Springs) where the piano is merely used as a drumming body. The title Piano Piano literally stands for the doubling of the instrument, but it also refers to the Italian expression, which calls for deceleration, calm and slowness. 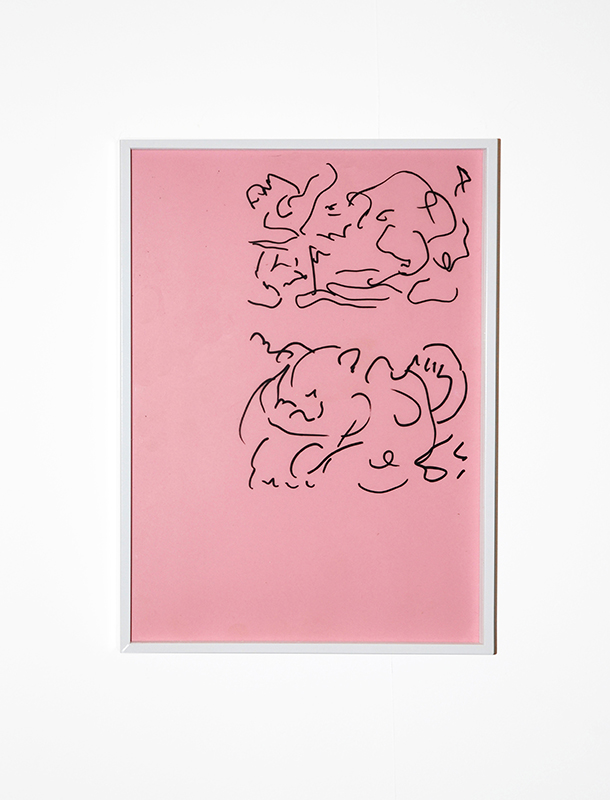 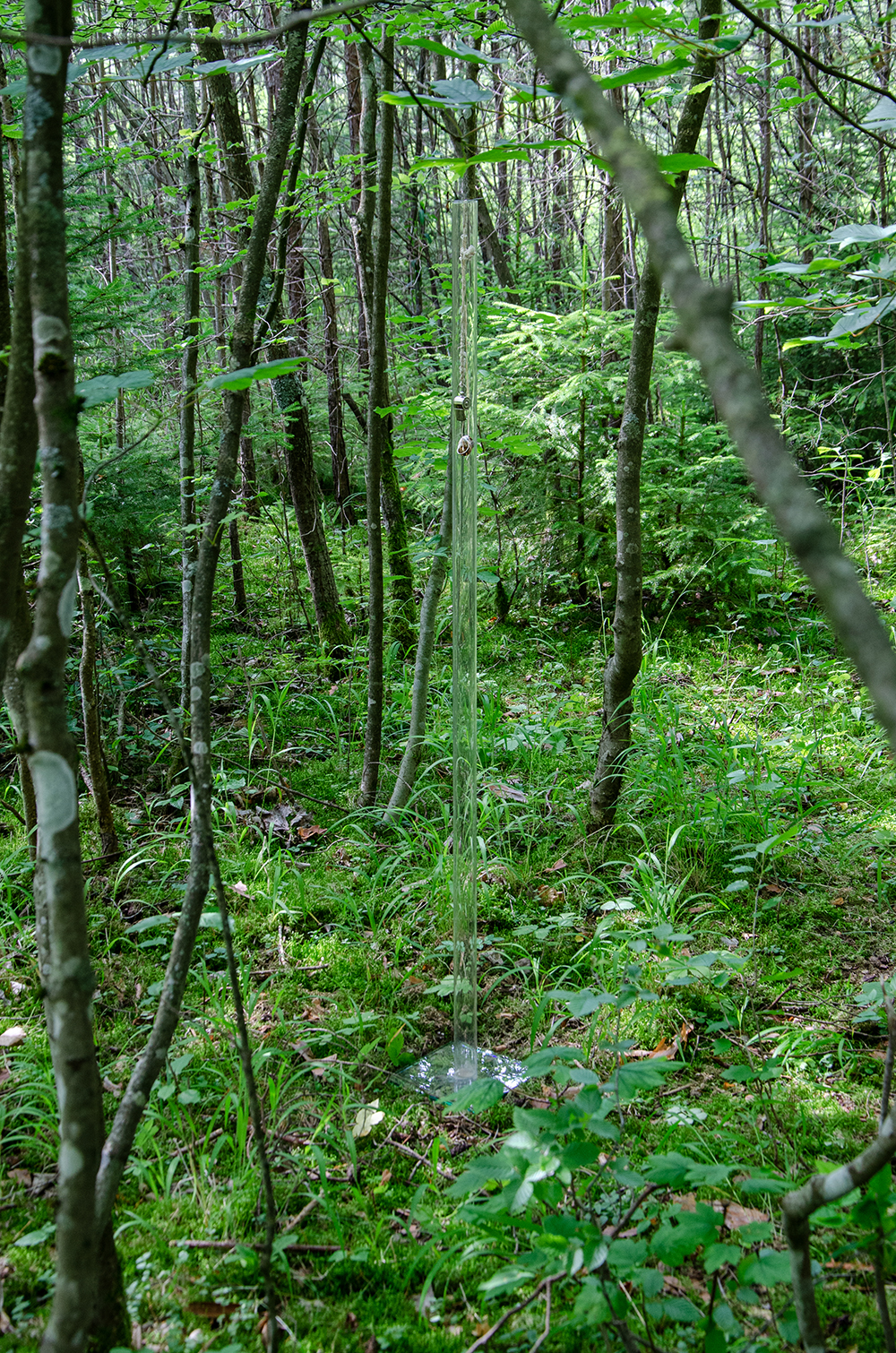 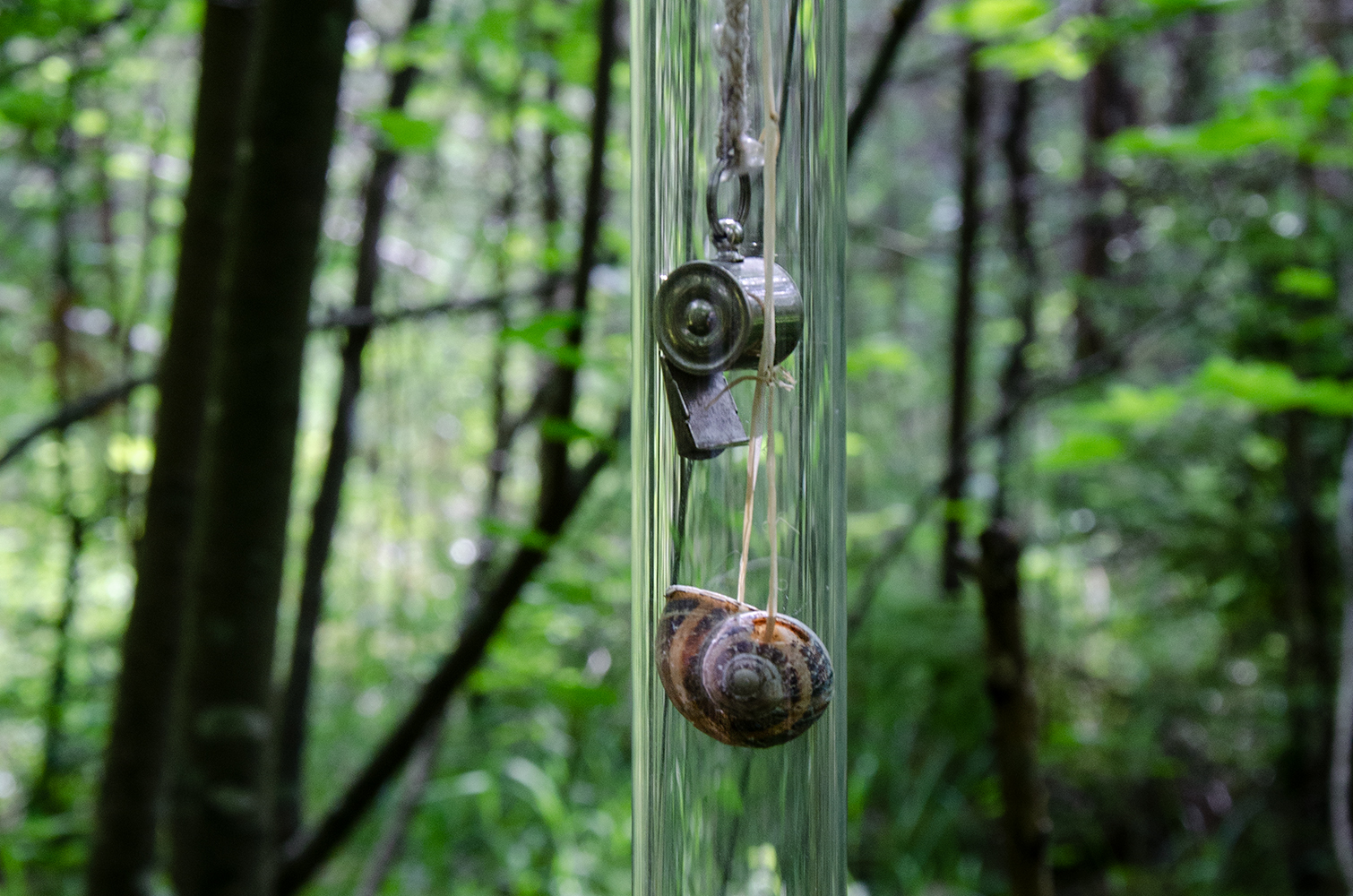 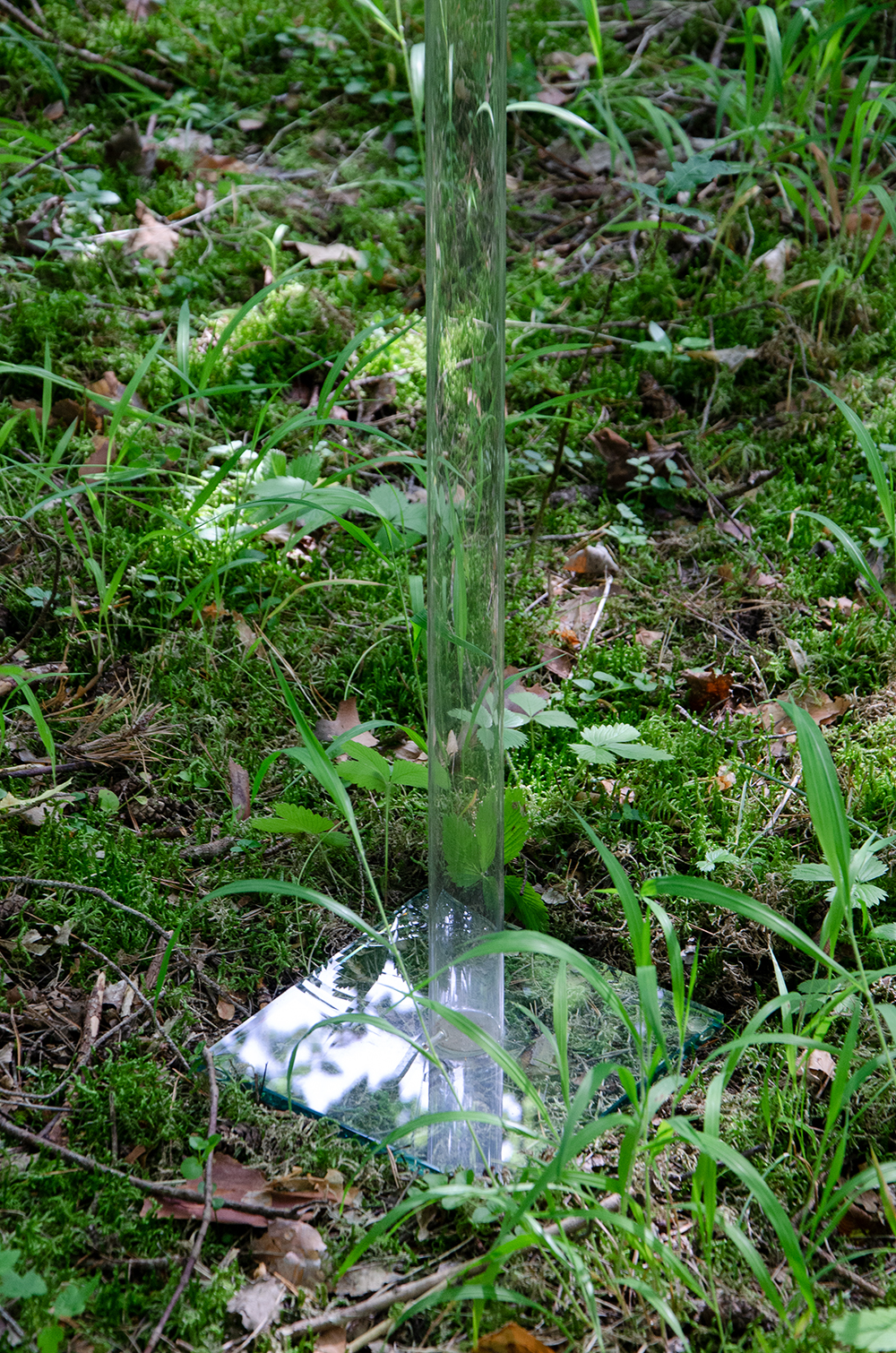 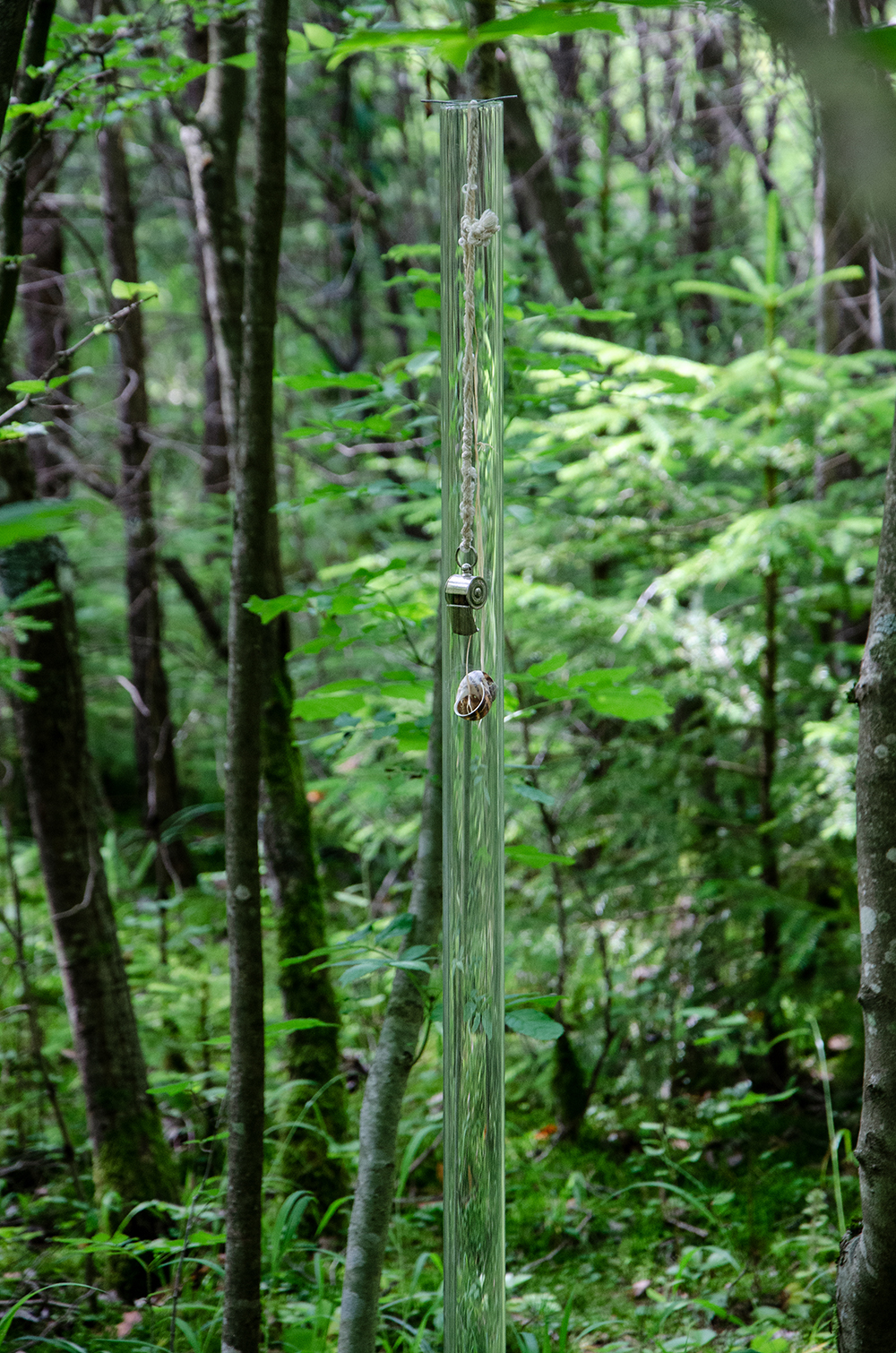 
The work Mouthpiece assembles three objects: A snail shell, a whistle and a glass tube that used to be part of a floor lamp. The elements have come together over a long period of time. Cultural and natural objects now face each other and mutually examine their meaning. They ask questions about the origin of instruments, how they found their form and how nature and culture are interconnected. The work was inspired by the legend that appears in various ancient cultures that music was discovered by humans listening to the wind blowing over the reeds and creating sounds.
The group exhibition Neck of the Wood took place on a sunny summer day in the forest of Altstetten.


Claudia Stöckli and Raphael Stucky continue the discussion of dissolution and new beginnings in their Totentanz (dance of death). The artists begin with a bone oracle that creates a situation to reflect on the past, present and future. This also involves playful image- making as a starting point for sonic interpretations: The artists create a finely woven carpet of sound, sometimes condensed, then loose again, samples and drones, with briefly flaring spherical MIDI keyboard sounds, synthesizer rhythms, footsteps in the gravel, a crow dialogue and electric bass sound bowed with a bow. (text excerpt by Salomé Hohl) 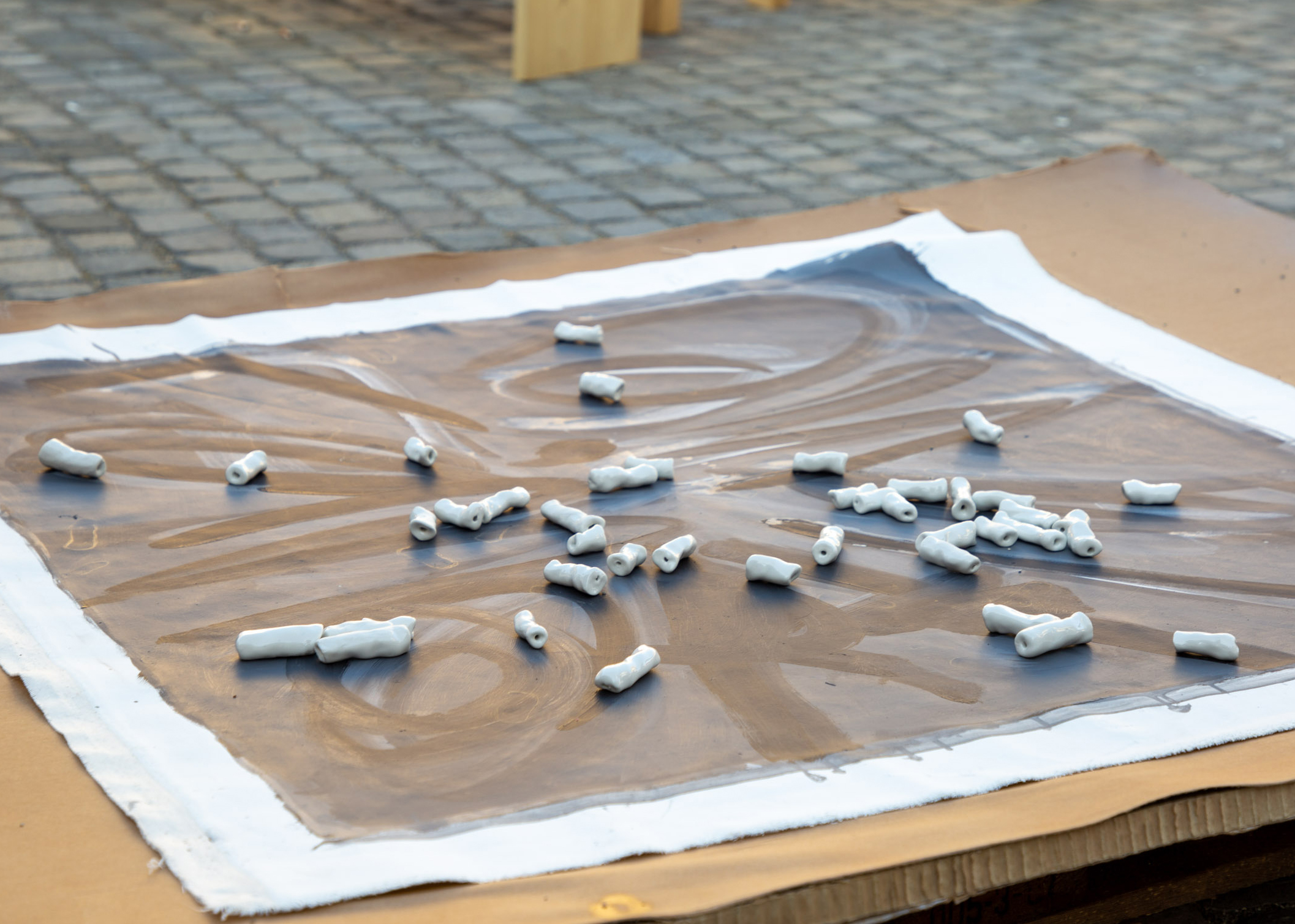 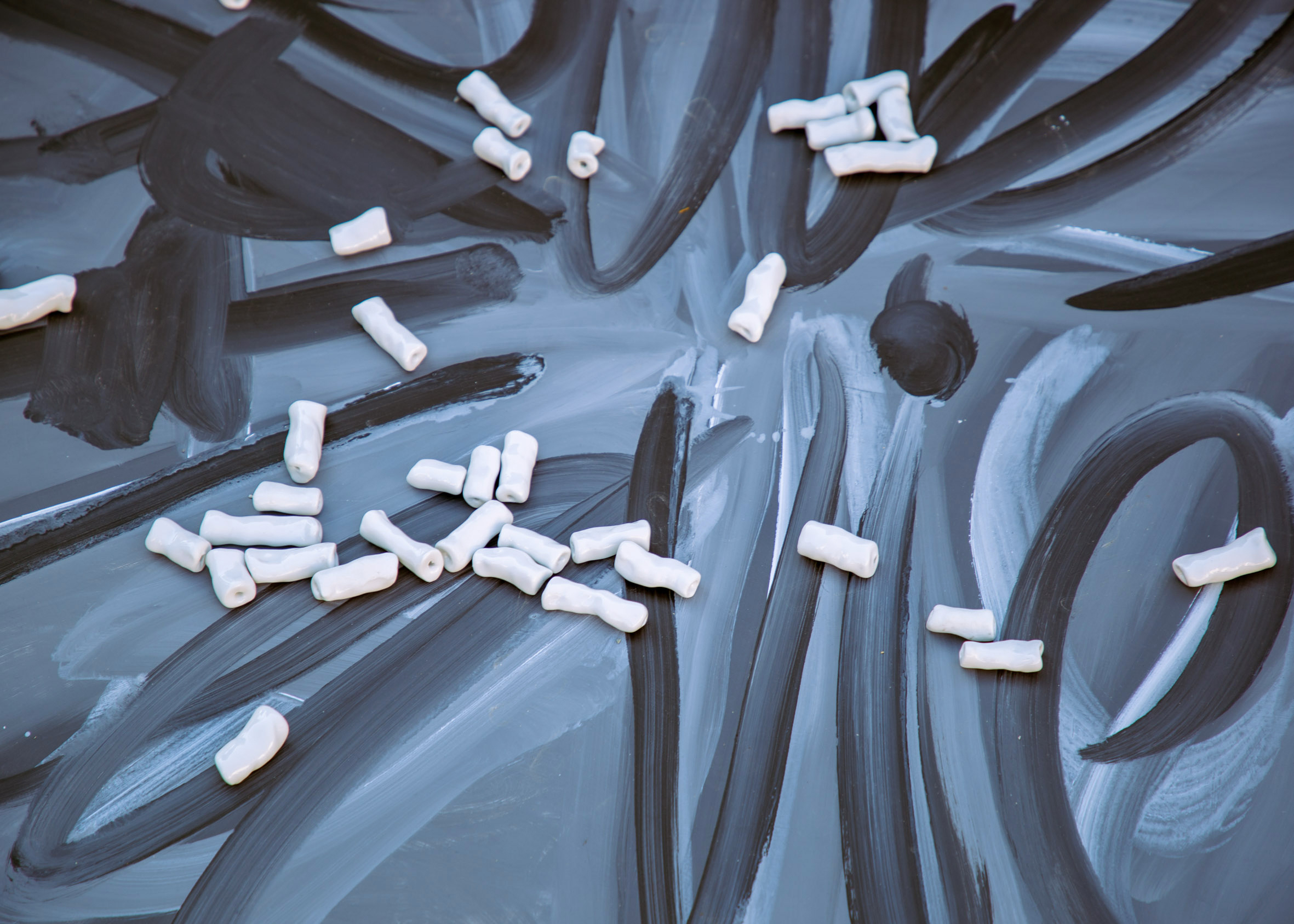